View basket “DAB3 – Female Characters (12)” has been added to your basket.

This is the third boxed set of our new range of Dungeon Adventurers, archetypal fantasy characters wearing practical clothing and armour and carrying realistic weapons and equipment.

This set represents female characters – Human and Demi-human, including a Human Fighter, Cleric, Thief, Magic User, Ranger, Barbarian and Monk, as well as a Dwarven Fighter, Half-elf Druid, Elven Magic User, Half-orc Assassin and Gnome Fighter. Some are multi-part models, and these will require assembly. They are supplied unpainted.

The models were hand-sculpted by David Soderquist, Patrick Keith and John Winter. They vary in height from 18mm to around 31mm tall to the eyes, and are cast in pewter by Griffin Moulds in the UK. Each set is supplied with 12 25mm round pewter dungeon-floor bases as well as a pack of 12 traditional plastic slotta bases for those modellers who wish to create their own base environments.  The miniatures are packed in a custom-made carry-case with a foam liner made by Feldherr, Germany. 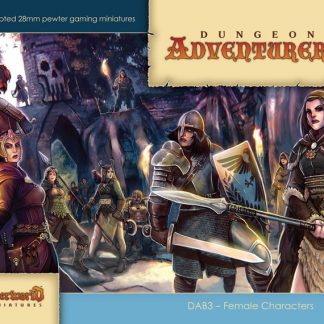