This pack of 5 figures represents the leader characters from a small band of kobolds; small but vicious and cunning dog-faced predators, which are often found infesting dark ruins and the upper levels of forsaken dungeons.  The set consists of a chieftain and his 2 bodyguards, a sub-chief of champion, and a shaman or tribal spell-caster.

The models were hand-sculpted by John Pickford.  They are now mostly single-part castings which require no assembly, but the sub-chief has a separate weapon arm.  They vary from 17-21mm tall, they are cast in pewter, and are supplied with 20mm round plastic slotta-bases. 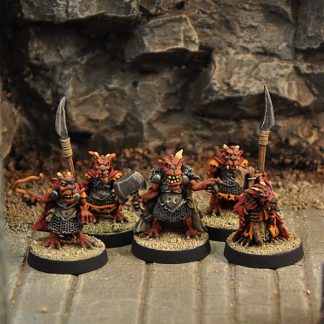