This figure represents a stone giant.  They are large and strong, but fairly peaceful, as far as giant-folk go.  They tend to live in small tribal groups in isolated mountainous regions, and often keep cave bears as pets.  This figure is armed with a large stone club.  It is also shown carrying a sack, although this part is no longer included with the current version of the model.

This model was hand-sculpted by Paul Muller.  It is a multi-part casting (separate arms) which requires some assembly work.  It stands at 66mm in height to the eyes, is cast in pewter, and is supplied with a metal-cast scenic base. 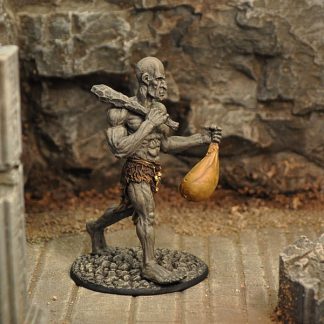