This figure represents one of the important characters from a small band of goblins, mean little humanoids which are often found infesting dark ruins and the upper levels of forsaken dungeons.  This is the goblin chieftain, wearing heavier armour than the warriors, and armed with a battle-axe.

The model was hand-sculpted by Drew Williams.  It is a single-part casting which requires no assembly.  He stands at 26mm in height, is cast in pewter, and is supplied with a 25mm round plastic slotta-base. 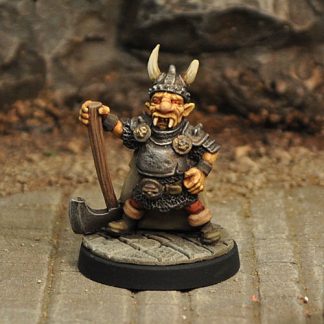