This figure represents one of the leaders of a tribe of pig-faced orc warriors, one of the filthy, evil humanoids which are often found in bands roaming the wilderness, or infesting dark ruins and the upper levels of forsaken dungeons.  This orc wears chainmail armour and is armed with a battle-axe.  He carries the legendary tribal standard, which aids the combat abilities of all orcs fighting nearby.

The model was hand-sculpted by Kev Adams.  It is a multi-part casting (it has a separate standard and axe/hand piece) which requires assembly.  It stands at 30mm in height, is cast in pewter, and is supplied with a 25mm round plastic slotta-base. 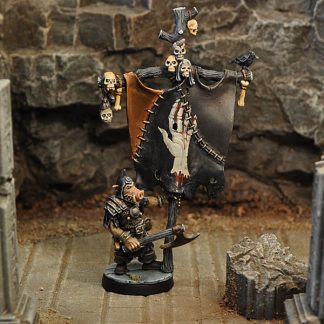