This is a single miniature from our range of non-player characters; archetypal fantasy denizens to add flavour to your town and city encounters.

This figure represents an apprentice magic user. He wears wizard robes and carries a variety of magical accoutrements, including potion bottles, scrolls and spell component pouches.  He has an ancient spellbook (probably stolen) under his arm, and he wears a loaded equipment pack on his back.  One day, he would like to be an adventurer!  It is a single-piece casting which requires no assembly.

This model was hand-sculpted by Stephen May. It is 26mm tall to the eyes, cast in pewter, and is supplied with a 25mm round plastic slotta-base. 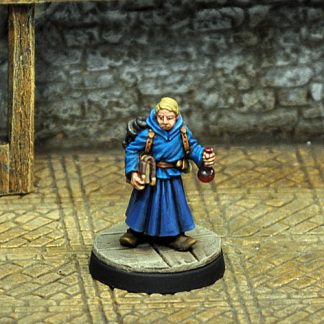