View basket “HT7a – Ogre I” has been added to your basket.

This is a miniature from our range of Humanoid Tribes.  These monsters are the staple enemies of many epic fantasy campaigns, from the ‘Caves of Chaos’ in the borderlands, to the giant-infested wilderness of Geoff.  This range includes the small but annoying kobolds, brutal and aggressive hobgoblins, bestial gnolls and colossal and powerful giants, as well as many other deadly adversaries.

This figure represents an ogre.  They are vicious, hulking brutes, widely feared for their liking for human flesh, and renowned for their strength and ferocity.  They sometimes live with other goblin tribes, often bullying and dominating their smaller cousins, and they sometimes settle in the upper levels of forsaken dungeons or abandoned ruins.  This figure is armed with a stone-headed spear and a stone hammer.

This model was hand-sculpted by Paul Muller.  It is a multi-part casting (2 separate weapons/arms) which requires some assembly work.  It stands at 46mm in height to the eyes, is cast in pewter, and is supplied with a 40mm round plastic slotta-base. 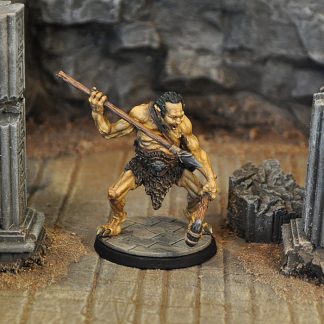